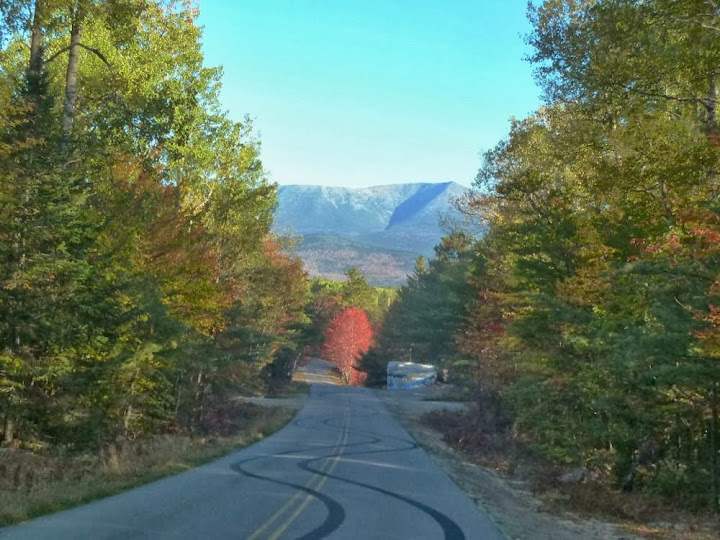 Later that day, at dinner, I overhear people talking about the record setting on the Appalachian Trail. They mention a woman who has done it in less than 2 months. They are a tad dismissive. She didn’t carry all her supplies: her husband drove along and provided support. That’s not an isolated view of her efforts: the point of the AT is not to get thru it as fast as possible. In fact, that is really the antithesis of the AT points out one of the commenters. It’s getting harder and harder to impress people these days.

Mount Katahdin summit at the elevation of 5,269 feet (1,606 m) is the highest peak of Maine which makes it a member of several peak-bagging challenge lists: Maine 4000 footers, AMC 4K club, US state high points, New England Hundred Highest. And while its altitude is nothing to brag about when compared to the Rockies, or even to many of its White Mountains cousins, Katahdin prominence - 4,288 feet (1,307 m) - demands respect.

If climbing is your thing, Katahdin offers multitude of opportunities from class 3, falls not always fatal, Knife Edge to technical climb with 5.7 rating Armadillo. According to the Baxter State Park website the Knife Edge, an approach trail to the summit that for 3/10 of a mile is no wider then 3 feet with drops on both sides, is a very strenuous hike, completely exposed, not recommended for back-and-forth crossing, prone to fatalities in inclement weather. As usual what is meant as a warning seems to entice inexperienced hikers to take it on the way down from the summit.

Facebook and Twitter bombard us daily with our friends’ accomplishments. Never-ending photo stream of drinks, plates, babies and peaks that were successfully ordered, prepared, conceived and scaled - not necessarily in that order - makes a large chunk of humanity seem like a band of insecure overachievers. Hiking the Knife Edge which made my heart beat faster and my hands tremble barely deserves a mention. Well maybe if I were to do that in winter: all that loose granite atop sheer drops, snow, ice, and subzero temperature to boot. Although, reading accounts of winter ascents, I come away with the feeling that the major accomplishment lays in successfully navigating logistical requirements unless you have someone else organize it for you. The actual difficulty of the achievement is squarely in the eye of beholder as reports of Rabid Outdoorsman and Ranger Man of the same climb illustrate. 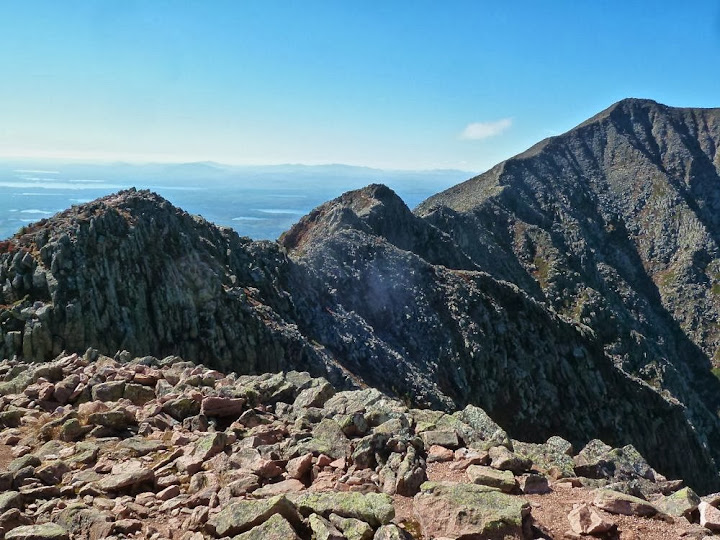 I don’t really care much about humanity. What I do care about is that we had to wake up at the crack of dawn to pass the gate to the Baxter State Park surrounding Katahdin at 7:30 AM. Not because we wanted to start our hike early but because the park controls trail erosion by restricting the number of parking spaces. In season, getting up a little earlier than usual is not nearly enough to secure an opportunity to climb Katahdin. You need to reserve a parking spot in advance and claim it before 7 AM. September, in addition to fall colors, offers a chance of an almost civilized time for a wake up call.

And while we are on the topic: I eschew recommendations of pre-dawn start on hikes. That might have something to do with my suspicious attitude to mornings in general. If we are to believe multitude of trip reports, hiking in the dark - after sunset - is a sign of poor planning. So why on Earth hiking in the dark before sunrise is a major feat to be proud of? If you ask me, regardless of the smug satisfaction with which one proclaims 3 AM start, it is still hiking in the dark: you are missing on views and unnecessarily risking an injury. 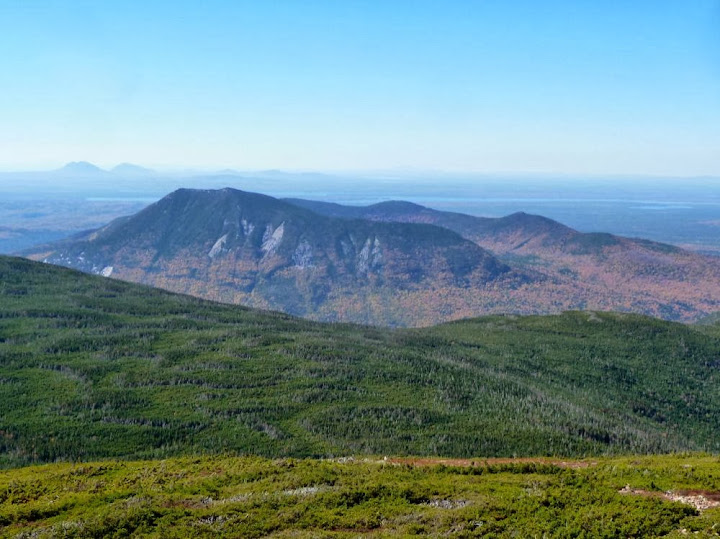 Baxter State Park is named after Percival P. Baxter, a governor of Maine between 1921 and 1925. While he failed as governor to persuade Maine legislature to preserve wilderness around Katahdin, he succeeded as a rich individual when, following the crash of 1929, he bought Mount Katahdin and donated it to the state of Maine on the condition that it shall forever be used for public park and recreational purposes, shall be forever left in the natural wild state, shall forever be kept as a sanctuary for wild beasts and birds, that no road or ways for motor vehicles shall hereafter ever be constructed thereon or therein.. From this first tract of 6,000 acres, he kept purchasing land almost yearly for 33 more years and growing the park to 202,018 acres. He doubted both federal and state authorities ability to manage the park and setup a trust to administer it endowing it with his personal wealth in his will.

While it may seem unfair to compare hiking Appalachian Trail in record time or peak-bagging the New England 100 highest in winter (97 people did that and applied for an official patch) to amassing acres upon acres of land to preserve the wilderness and benefit the society, people who accomplished those deeds did them as much for themselves as for public recognition. And since they haven’t achieved their goals anonymously or in secret it’s up to me to decide which ones to respect and which ones to shrug off as silly or arbitrary.

As for me, as much as I enjoyed the views from the top, as exhilarating as the razor sharp the ascent was, I didn’t accomplish anything on my hike to Katahdin, I merely had a good time and happily went about my life afterward. 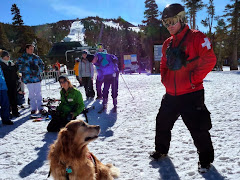 I’ve heard it countless times: He is really friendly. Or, she just wants to play. Never mind that the subject in question flattens its ears, starts growling, barks and generally looks ready to attack. And even if it is genuinely friendly, I am not. That is, I have no inclination to play with strangers’ dogs. Befriend me first before you expect me to pet your four-legged companion. He’s afraid of your trekking poles. The last one was addressed to Damian who started hiking with poles after a minor skiing injury. I knew trekking poles were a sham but didn’t realize dogs and their owners shared my view. And if that’s the case, dogs with that opinion have no business on a hiking trail, at least not without a leash. 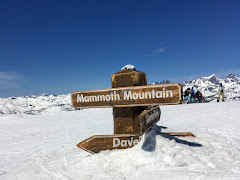 For a moment it seemed Mammoth would not close at all this year. But the global warming reasserted itself and, with the snow melting faster than expected, the closure date was set to August 6th marking it the second longest season in the entire history of the mountain. The 2016/2017 was a truly exceptional winter (and spring, and summer): the level of snowfall surpassed only once since 1970 and we skied and snowboarded not only on Memorial Day but also on the Fourth of July. With the bike park opening on June 23, Mammoth may be the only American resort where you can bike and ski at the same time on the same mountain.