We’ve gained some notoriety. Or at least our truck has. We stop at a roadside exhibit and a lady and her granddaughter are asking us if we were in Langtry 2 days before. We strongly suspect ours is the only truck with Vermont registration plates here. It’s easy to spot us. People remark we are far from home. They have no idea. A border patrol officer at the checkpoint - yes there are checkpoints in US - seems confused. Is it Vermont or is it Poland we are from? But he stays polite. Looks at our Vermont driving licenses as if they were not real. I cannot blame him. They don’t look real to me either. We try to produce passports but he doesn’t want to see any other documents and waves us through.

I guess if we wanted to smuggle something, driving from Vermont to Texas might be an effective if time consuming option. Checkpoints do surprise us though. It’s not like we crossed the border anywhere. 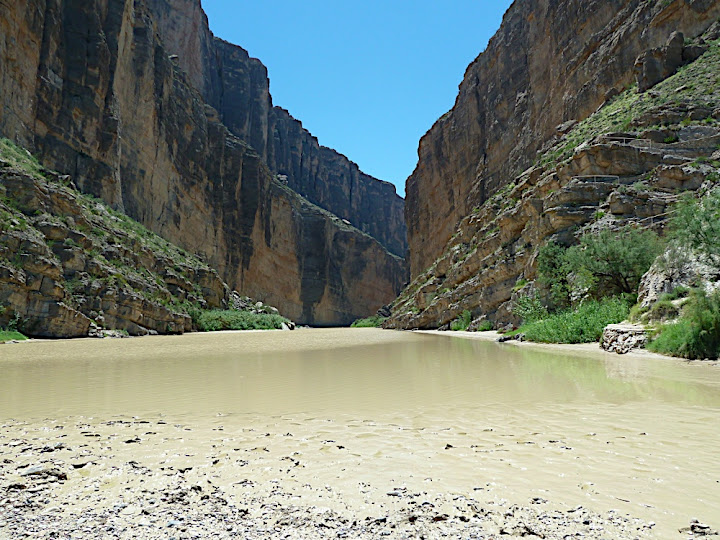 Mexico on the left

Next time we are stopped I don’t volunteer any information. I just answer in monosyllables: yes and no. The officer is less confused, which makes entire experience quicker if not less annoying. He does not even ask for a driving license. And we have the right skin color so why bother. He wants to know if we are citizens, and if we were camping. Interesting combination. By the third time we crack the secret code: all one needs to do is to say convincingly that one is an American citizen. Being white doesn’t hurt. This time the patrolman wants to know what we have in our truck. I struggle to keep from smiling. What we don’t have is a better question.The whole thing is just something the Feds do to keep the states at ease, so they don’t all go Arizona on them. It’s not unlike the security theatre at the airports. Our tax money wasted to create an illusion of safety.

This is a border area. The land that was fought over between Mexico and US in 19th century. The border itself is on the Rio Grande river - or Rio Bravo del Norte as they call it in Mexico.It does not look too Grande when we hike some of the amazing canyon trails. It seems I could stretch my hand and touch Mexico. It feels like just a couple of stones would be needed to get to the other side without getting wet.There is no-one in sight protecting the border. Hundreds miles of desert on both sides are more than sufficient. And if you get through then there are the checkpoints. I am sure that there are some security measures invisible to my untrained eyes. But that does not stop the Mexicans from setting up little piles of arts and crafts with Donations appreciated - your friends and neighbors hand-written sign. I am slow on the uptake with this one. But yeah. They are friends and neighbors that by the joke of the history ended up south of the river. They will even sing to make one’s hike more pleasant. For a donation of course. 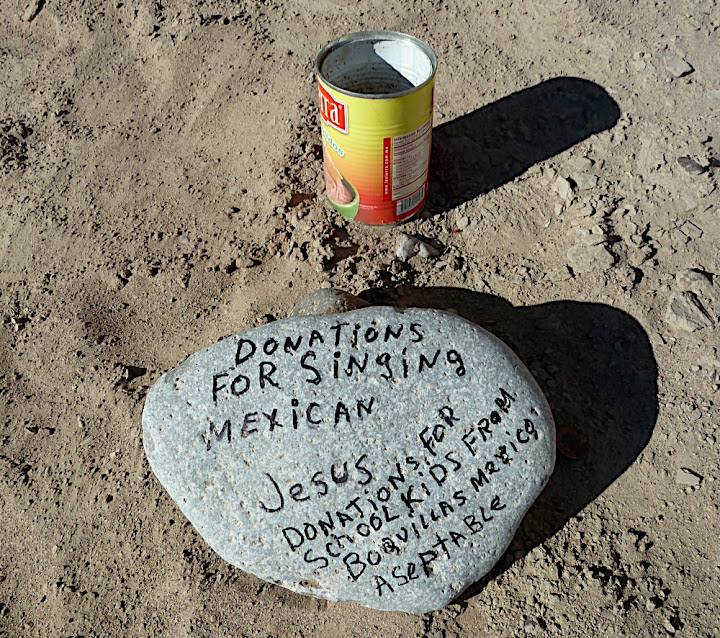 All the leaky checkpoints and the entire immigration system are designed to provide cheap labor where and when needed. Illegal workers are willing to work for less and - fearing deportation - they don’t complain when their rights are violated. It’s a convenient topic when the election time approaches but no-one really wants to change it.

This is a stupid, unnecessary border. The river constantly attempts to change it by veering left and right. To the point it’s been put in a canal near El Paso to keep it in place. It’s such a wasted opportunity. If only US gave up on the senseless war on drugs, the gangs in New Laredo and Juarez would disappear, the border could be opened. Mexicans would come. Work legally, buy houses, improve the food quality. The national parks could be extended to the other side. Sometimes it really does not make sense to draw the line in the sand. Or in the middle of the river.

Precious few Americans want to be janitors, gardeners, clean houses or work in fields picking up vegetables that we insist on growing in areas where nothing should ever be cultivated. The illegals are not stealing jobs. Legal immigrants - like myself - are. This well paid, college educated, strange accented English speaking crowd brings newfangled ideas and is getting the best jobs. Americans should try to keep out people like me if it’s jobs they are after. But this is a lesser evil anyway. I might have stayed where I was born and not pay all these taxes, not go to the fancy restaurants here, not buy several cars produced here, not acquire couple of houses and not spend any money on American vacations. Living elsewhere means not contributing to the growth of the American economy. So - let’s stop whining and start voting. Let’s get the government spend more on schools, and less on stupid fence and border patrol that pretends to keep out the very people who make this country work.

The border will disappear when standard of living equalizes on both sides. Either by Mexicans growing richer or Americans - poorer. And we don’t want to risk the latter by walling ourselves in. So let’s learn Spanish and open the border with Mexico. A healthy competition is an American idea. And the game America is so good at winning. 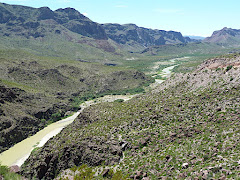 Texas has some wonderful laws: when you own the land you can pump out as much groundwater from underneath as you want. Comes really handy when your land is arid but you desire to grow some water thirsty lettuce or pecan trees. If that dries wells of your neighbors so be it. It’s about who has the biggest pump after all. Or when you don’t feel like farming at all, you can simply find a city in need of water and export water from the desert. Just invest in a diesel pump and some piping and the money will flow your way. Ingenious, huh?It doesn’t hurt to have a river or a stream flowing through your land. Just make sure you are upstream. In the case there are too many claims you have a better chance to use the water before the river dries up downstream.

There are at least two incredibly cool things to do when in Carlsbad Caverns. And somehow - by sheer luck and happy timing - we manage to strike both. The first is to see the bats flying out. The second - to walk down the natural entrance to the big room - preferably alone. Bats flying out for the night of hunting are so spectacular that park service has built an amphitheater around the cave entrance. On Saturday evening there are so many people that we nearly give up. But we stay and endure the interpretive part. It’s not like we don’t learn couple of useful facts but the show is fine tuned to keep kids interested and public is invited to participate. The two things that guarantee I’ll be mortified cringing in embarrassment. The ranger somehow holds it together through questions like: how do bats give birth if they are hanging upside down? And: what happens if bat mom needs to give birth while flying?