Pensacola welcomes us with an unpleasant surprise. All the cheapo motels that are plentiful along the shore suddenly demand twice as much as we are used to. And many places are fully booked. After spotting one or two workers dirty from sand and oil we suspect it’s caused by the influx of BP contractors. But we are wrong. The receptionist in the Marriott, where we finally decide to blow our nightly budget, attempts - in vain - not to show her disdain. How could we have not known? It’s the Blue Angels weekend.

Sexually ambigous name comes from Blue Angel nightclub in New York. It does not honor the club of course, nor the movie for that matter. Apparently the team was looking for something better then Navy Blue Lancers and they stumbled upon the advert in a magazine. Clearly they didn’t think it was tacky. The flight demonstration team gives shows around the country for entertainment and to boost navy’s recruitment. Faithful fans travel far judging by the multitude of non Floridian license plates that we see: Alabama, Mississippi, Kentucky, Tennessee, Louisiana. Not surprisingly the shows and Blues fame happen mainly in the southern part of US.

Feelings towards the Blue Angels are just one aspect of the southern attitude toward military. Simply put the American Army (and the Navy, and the Coast Guard, and the Air Force - all the uniformed services financed by the federal taxpayers to the tune of over 721 billion dollars a year) is universally admired here. Whenever the military tries to scale back by closing a base locals and their representatives demand to keep it open. Military base is great for the economy. High regard for all things military does not extend to the current commander-in-chief. Lawn signs calling Obama a radical socialist or simply pointing out that he’s not my president are not uncommon.

It seems that no career is more noble then serving in the army (or the navy etc). No achievement is greater then being decorated with a military medal. Having landed a plane on an aircraft carrier is worth mentioning to total strangers. It may have had something to do with the fact that we were in National Naval Aviation Museum at the time looking at the exhibit of the said carrier.

The museum (free admission!) is located inside Naval Air Station Pensacola and you have to cross a military checkpoint to get in. But quite frankly it’s nothing compared to crossing a security line when boarding a civilian airplane. A uniformed lady asks us where we want to go and hands us a pass, which restricts our movements to a few publicly accessible attractions inside the base. The only over-the-top element is a stern warning that reminds us to destroy the pass after leaving the base. According to the museum guide the base is enormous with tens of thousands of trainees. But you don’t see that: roads that you are not supposed to take are clearly marked, but without any more checkpoints or guards.

The museum has the greatest selection of old planes that I’ve ever seen in one place (see my photos). Among the ever present praise of American navy wartime accomplishments there are nuggets of information: about progress in engine construction, use of dirigibles, logistics onboard an airplane carrier. The restoration going on in hangars around the museum reminds me of assembling model airplanes kits - in full scale.

It’s all fun and games here. The current wars are barely mentioned. But I am sure the place is ready for a collection of drones and computer consoles to be admired in 50 or so years from now. 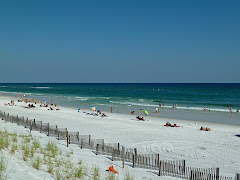 We slowly travel west towards Pensacola looking for signs of oil. Every orange boom on the water, every bit of dirt in the sand make us think it’s there. But beaches are clean as far as Panama City and the increasing number of for sale signs and foreclosures belongs to another man made disaster: collapse of the real estate bubble. We check out every beach afraid it may be the last oil-free one. At the local restaurants we are told to enjoy our oysters while they last. It’s like everyone is aware of some biblical disaster looming around the corner. We do find something on Miramar Beach. There is a notice that the beach has been affected by the Deepwater Horizon oil spill and swimming may be hazardous to your health. Nobody pays any attention to that. No tar balls or oil sheen in sight. As everywhere else parents let small children bathe, teenagers try paddle boards, retirees sit on half-submerged beach chairs. 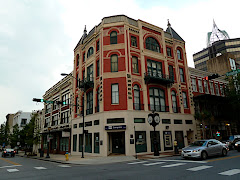 We escaped to Mobile trying to get away from Pensacola’s Blue Angel’s weekend. We don’t like crowds and it turns out that if you prefer solitude Mobile is a perfect destination. There are absolutely no people here. They probably all went to Pensacola for the weekend. Mobile has a big problem. You cannot really research it on the internet. Try googling for mobile life music or mobile restaurants or mobile night life and you’ll see what I mean. One has to wonder why city officials did not take advantage of the anti-French sentiment and change the name to something less ambivalent - may I suggest Verizon, Alabama? French are to be blamed for establishing the city here (in 1702), and christening it (after a native tribe), and naming most of the streets (after various French things and catholic saints). Later Spanish changed all the names but when the city finally was taken over by Americans they changed the names back to French. This is strange: as if Canadians took over New York and changed its name back to New Amsterdam. But in any case, the town even today is supposedly quite catholic so we expect good food and some entertainment (think New Orleans or Montreal)