Small talk in Big Sky, Montana goes like that:

The third time I hear the admiration in my interlocutor voice my curiosity is piqued: which aspect of Ted Turner biography grants him such notoriety in the Treasure State?

Is it his marriage to Jane Fonda? The third one for both of them and neither remarried after their divorce in 2001. She is a famous actress, who looks more striking with each passing year but I doubt her fame is what distinguishes Ted Turner in the Big Sky Country.

He is American media mogul, founder of CNN and a major star of Time Warner and AOL debacle but as much as television and Internet are indispensable in rural Montana, I don’t think they are the reasons Montanans mention him fondly.

It could be the 16 ranches in US that he owns, spanning almost 2 million acres and making him the second largest landowner in North America. In the state where cattle outnumbers people 2.5 to 1, that’s certainly a meaningful distinction.

Ted Turner bison herd numbers over 51,000 animals and we may have seen a good chunk of it passing Flying D Ranch on route to Spanish Lakes trailhead. 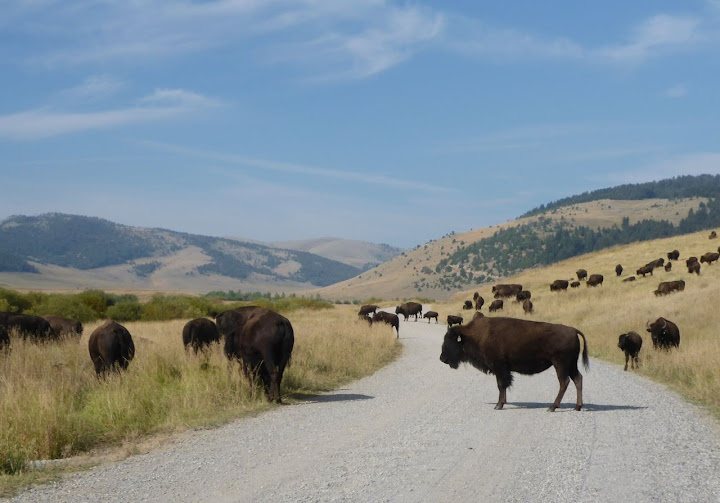 Bison are certainly more impressive and scary than cows and they know it. When they decide to stop on the road in front of a car all one can do is patiently wait, gingerly snap pictures, and hope they won’t charge. Thankfully the only damage we suffered was the looks of disdain afforded our truck.

Turner also owns 45 locations of Ted’s Montana Grill (only one of them in Montana) that proclaims Bison is the cornerstone of our menu and we are proud to serve more bison than any other restaurant in the world in a creative interpretation of farm-to-table precepts.

Bozeman Daily Chronicle pours its editorial heart to Ted Turner yearly. After skimming just a few titles you’ll be forgiven to think of him as a second coming of Teddy Roosevelt: On Turner’s ranch, Montana mulls future of its bison, Ted Turner tackles issues of concern at Bozeman Rotary event, Citizen Turner: Billionaire makes home in Montana, where the buffalo can roam, Ted Turner charms at library fundraiser, Karen Averitt: personal chef to Ted Turner. With this amount of sycophantic zeal, it’s no wonder local population is in awe of the billionaire entrepreneur turned bison rancher.

Spanish Lakes are beautiful and well worth the effort of almost 17 miles round-trip hike.

Chances are you may not like using Furkot. I won’t take it personally. It’s just statistics. We all like different things. What is Furkot? - you ask. It’s a trip planning application. It’s delivered directly to your browser through magic of the Internet, so you don’t have to buy or install anything and it works out of the box on your desktop, laptop, tablet, and phone. Well, unless your laptop remembers Bush presidency. Then we might have a problem. Or not, since - as we already said - you might not like Furkot in the first place. 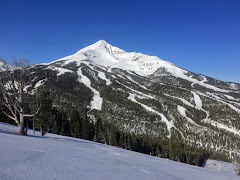 As far as endurance challenges go, the one in Big Sky Resort is refreshingly mild and strangely informal: the most tram laps in a single day. The current record is unlikely to ever be eclipsed. Unless, of course, the resort management extends the Lone Peak tram hours. The terrain served by the Lone Peak tram is Experts only - double diamonds all around. The Liberty Bowl with its single diamond is a sole exception by virtue of being slightly easier than the adjacent Marx or Lenin runs. Even so, there is always a line at the bottom of the tram, unless fog takes the visibility away as it was on the day Rob Leipheimer set his record, which in my book, makes it all the more impressive accomplishment.