We plunge underwater to observe habits of juvenile Zalophus californianus. Or, in the words of Ivan, our dive master extraordinaire, to play with youngsters. And play is what we try to do. The result is, to be honest, that we are being played with. Sea lions treat us as clumsy companions who cannot swim fast enough and have to be jolted into action by deftly applied bites. We develop various techniques to keep them from nibbling on our wet-suited bodies. It’s a good thing they seem to have preference for yellow, which means that our snorkels, fins and secondary regulators are in greater danger than our fingers. 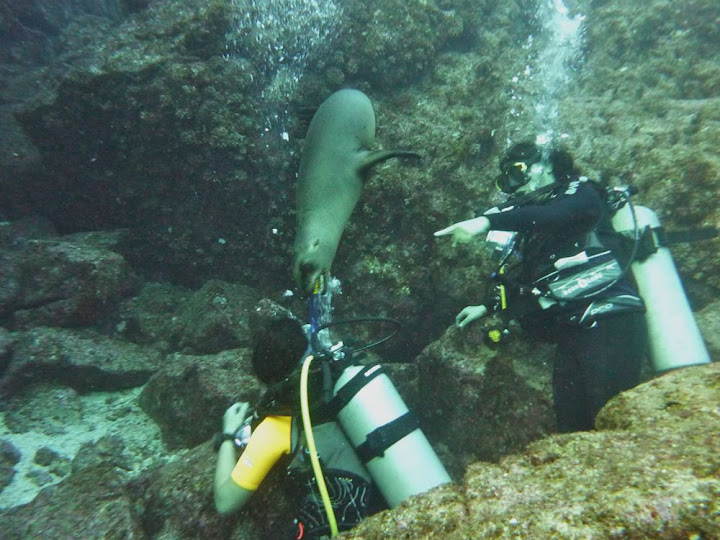 Pinniped equivalents of unruly teenagers are not as dangerous as their parents intent on guarding their territory against humans. When we drop the anchor close to an islet that sea lions inhabit they start barking at us in unison. We don’t get scared when aboard a boat but underwater is a different matter altogether. When an adult male decides to defend a narrow canyon we obediently turn away from his bared teeth and swim away.

Sea lions are not the only animals we get to swim with, although they are by far the most playful. We obtain a permission to visit El Mogote, a site of Rhincodon typus nursery and snorkel along giant dot-patterned animals. As appropriate for the nursery inhabitants whale sharks that we see are just babies. But they do feel giant tous already. 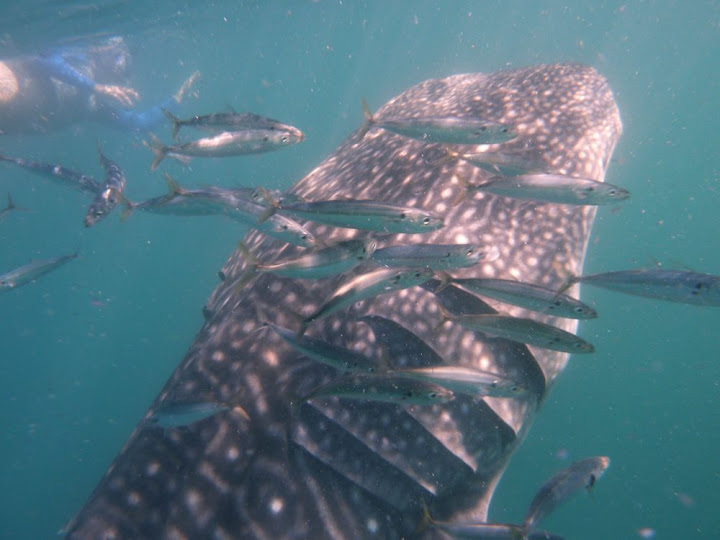 As instructed, we try to keep our distance and stay slightly behind following gentle beasts. Our fins help, but it still takes some stamina to keep up. We are grateful that from time to time they stop and feed basking in their spotted glory. Horror stories aside these sharks seem to be totally uninterested in humans and schools of fish swimming around. But every time we break unwritten pact by crossing the undrawn boundary they just dive and disappear in murky water leaving us awkwardly bobbing on the surface.

Snorkeling with whale sharks is a complete opposition of diving with Sphyrna lewini. Where the former is shallow and relaxing, the latter is deep and adrenaline-rushing. Hammerheads of El Bajo dwell slightly beyond our no-decompression limits. We mostly see silhouettes in the hazy blue water. Their inexplicable shapes evoke surrealistic paintings. On ascent we half expect giant wilted clocks or a man with a bird cage in place of a head. Or maybe it’s just a diver’s high talking. 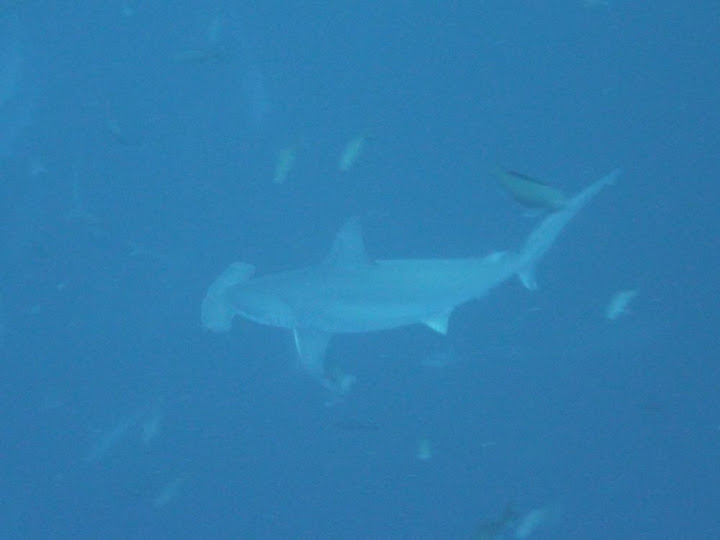 There is yet another large animal in those waters. Not particularly graceful or well suited for marine environment. Blowing bubbles and scraping corral with fins. Differently from sea lions Homo sapiens can be approached out of water, so we can continue our observations onboard. What humans lack in adaptation they more than make up to in gadgetry. Fins, snorkels, scuba vests, lamps, noise makers, inflatable tubes even the post dive ear driers amount to an astounding display. Social interactions are amazing. Complicated choreography of languages, political views, religious spectrums and economical backgrounds awakens our inner anthropologists.

Slowly the initial confusion diminishes and our small troupe sorts itself into grouplets. While sea lions bark to protect their lounging spot, humans use language to designate French and Spanish dining tables. Our French is long forgotten, but our Spanish is non existent so we end up taking our meals with francophones. As socialization progresses we begin to interject French phrases in our daily conversation. Thankfully we are back to dry land before Damian starts calling our humble vessel: zee boat. Well, I guess it’s better than barking, n’est-ce pas? 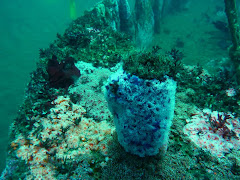 You don a full body wetsuit, the thickest you can find. A hood, thick neoprene gloves, booties. You go in, shiver for half an hour and come back up to pour hot water into your suit to warm yourself up. If you see more then two body-lengths you consider the visibility outstanding. The unwieldy wetsuit constraints your movements, cold water suddenly and inexplicably finds its way into your booties, air bubbles slowly build up under your hood and then escape with sudden swish triggering your panic response. The Caribbean bliss of the calm underwater world inevitably becomes just a remote dream with preciously few tangible links to frigid reality. 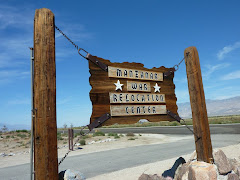 Internment. I suspect I know this word longer than people my age born here. One winter morning almost 30 years ago my family TV set flatly refused to play the usual portion of Sunday cartoons and was showing somber people inexplicably wearing uniforms. The night before more than a thousand people all over Poland were detained and placed in isolation sites. Phones were disconnected. Curfew was imposed. Tanks appeared on streets. And I found out what internment meant. So when I walk around the place which had been an internment camp for Japanese Americans during World War II it’s not some kind of abstract history lesson for me. Still, I have a strong and strange feeling of disconnect. I know to which self-serving purpose the communist government introduced martial law. But it’s the United States, a democratic country, a self-professed defender of freedom. How could it so easily excuse itself and start behaving as an authoritarian regime?