Bourbon Street swarms with green backpacks. Marked with a cross sign and a slogan we believe. Must be some cult. Yes, Lutheran teenagers are in town for National Youth Gathering - event held in New Orleans every three years and according to the press release bringing 25 thousand people. Looks like more than that from where we are standing. 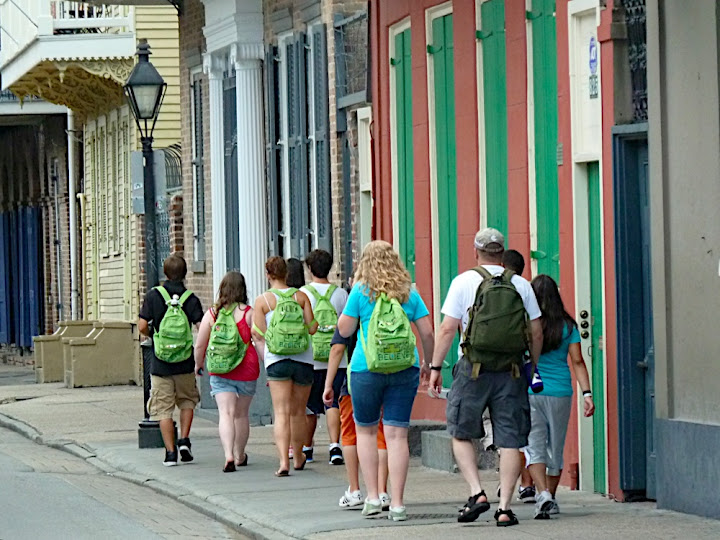 It is a bit surprising though. We just drove through a collection of Alabama and Mississipi towns that seem much better suited for prayer and thoughts of a better life. It’s easy to stay chaste in Thomasville, AL. It’s even easier to stay sober in Oxford, MS. There is nothing to envy in Kosciusko, MS. But New Orleans is a different matter altogether. Here young Lutherans descent on French Quater familiarizing themselves in depth with all cardinal sins. Lust, gluttony, sloth reign supreme in Vieux Carré. Hustlers invite people to barely legal gentleman’s clubs to see men/women acts. It’s impossible not to overeat. Drinks are not just accessible: they are practically required. Navigating all this is probably some kind of a boot camp. If 16 years old with their elevated hormone level survives Big Easy, you can send them to evangelize the hell out of the rest of the world. 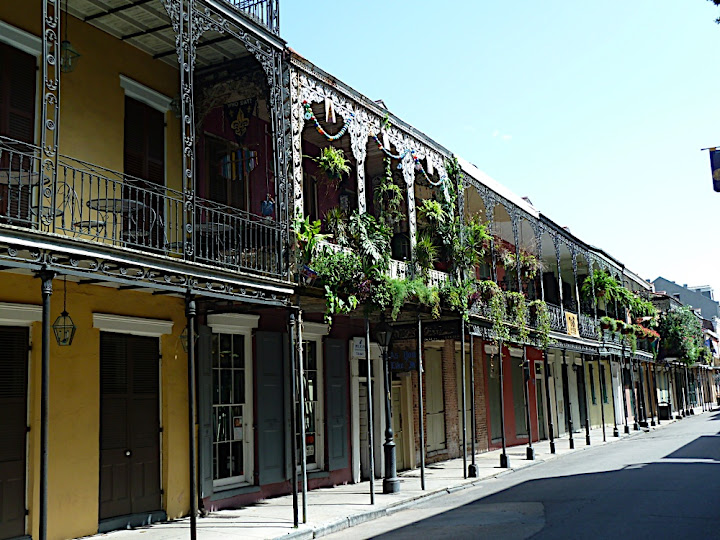 Cafe Du Monde is completely swamped by Lutheran youth. We give up beignets - there must be a virtue in denying gratification, right? - and come back the next day. Despite wait to be seated signs and after frantic efforts to attract attention, we are told to sit anywhere. Anywhere apparently means not the table that we pick. The wait staff is bustling around ignoring us. Finally Asian grandmotherly waitress stops by and tells us she cannot serve us in this section and our waitress will come. We wait some more and finally stir a bit of commotion moving to the section of the only waitress interested in taking our order.

We try Lüke brasserie for lunch in a vain attempt to escape green cultists. No such luck. At least here they sit in one place and don’t use the priapic noise makers, which is easier on the eyes and ears. Their conference theme is servanthood so maybe they are frequenting posh restaurants to watch and learn from the wait staff? What’s next we wonder: high-end hotels? Ferrari dealerships? 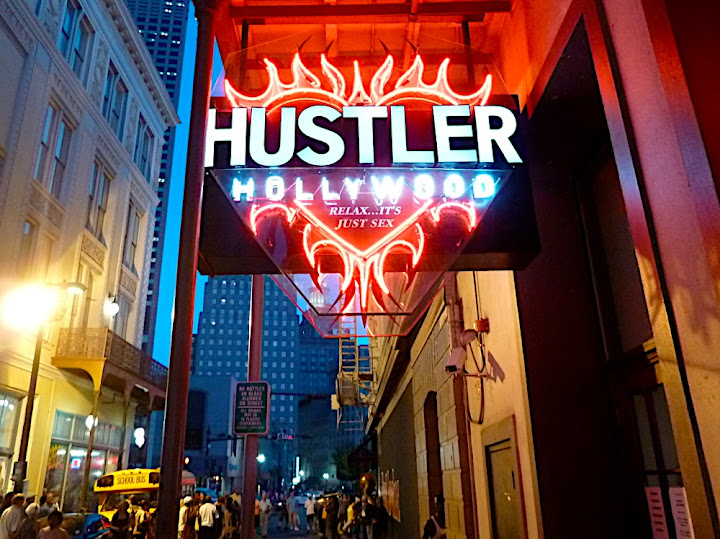 Young Lutherans appear to go to bed early as we don’t meet any when dining at Cochon. At this point we are on the lookout for religious cults and briefly suspect a collection of Tirol hats at one table. We decided on Cochon following professional advice of our Boston neighbor Jackie. We order 4 different dishes of pork. They don’t serve cracklings for dessert or we would order it as well. Pleasantly drunk and just slightly too full we wander through the busy streets getting more drinks at places where they play jazz. By the way, National Park Service confirms its place as my favorite government agency. Their self guiding walking tours brochures are excellent. And free.

There is not enough time in a day - or night - to fit all the meals that we want to have. Lonely Planet guide devotes twice as much space to food than all other New Orleans attractions combined. Late breakfast at Croissant D’Or Patisserie: fresh ham and cheese baguette with cafe au lait for Damian. I forgo some of the French ambiance and stick to cafe latte. And it may be the last chance to taste gulf oysters for some time - for that offense alone I would flog BP executives. We pick Bourbon House purely on looks (and lack of green backpacks). Oysters at this time of year are delicate and creamy here. Not for beginners. But after frequenting Neptune’s in Boston’s North End we are at least intermediate. Lori - our bartender - explains the oyster sex change phenomenon and how it affects the taste.

Just to think that if only Napoleon did not need the money: half of the continent could have towns like this one. But without Poles refusing to fight in Haiti, we would not have the Haitian immigration. The jazz might not have begun here. So let’s not mess with history. Katrina and green backpacks come and go. New Orleans is for ever. 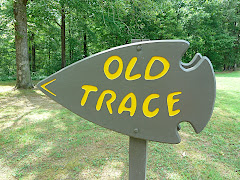 We travel along Natchez Trace Parkway built roughly along the old trail used by boatmen to return home after floating down Mississippi river. It’s a strange road maintained by National Park Service. Driving it is like driving through 400 miles of park. You are easily fooled thinking you are in the middle of nowhere, but most of the time you are in the narrow green strip of trees isolating the parkway from farmland and subdivisions. Better this than nothing.