What’s strange is that Picayune Strand does not look like forest at all. Well, there are some trees - mostly cypresses and palms. But there is also a dense grid of roads and canals here. All roads have numbers and sometimes they even have names. On some corners we even see street signs, but names - Miller or Lynch - are not on our maps. The pavement randomly oscillates between the asphalt in rather good condition and dirt roads with huge potholes filled by water after recent rain. 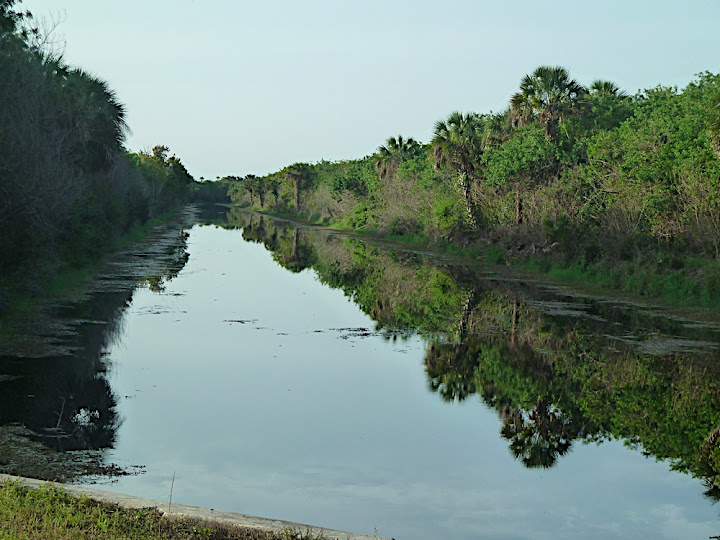 Our GPS of course does not think that we are lost. It happily points the road out of the maze. The only problem is that the road GPS likes is nothing but a narrow path in reality. We miss it at first and then find it overgrown with grass. We decide against taking it fearing for our truck.At some point we spot a red Jeep going in the opposite direction. Relieved we wave frantically. They stop and before they even speak we realize they are as lost as we are. At least our GPSs agree.

Nobody builds a dense network of roads without any connection to the outside world. At least this is what we thought until now. It all kind of looks like a city which has been suddenly abandoned. Except that inhabitants somehow managed to remove any traces of their houses as well. Or more probably it looks like a city that was planned but never built.Finally we decide to just drive on one of the streets North. It’s not where we wanted to go, but the surface marginally improves and we take it as a good sign. Finally yet another car appears and people in a familiar red Jeep ask for directions. We follow them and find ourselves passing under I-75 and later arriving at something that actually looks like your typical exurbian street (translation: there are houses here).

Once we regain cell coverage wikipedia confirms our guesses. The area we have been so thoroughly navigating through is the site of one of the biggest real estate scams in Florida. In the 1960s the developers created the largest subdivision in America. They constructed roads, dredged canals to dry the land and started selling the American dream. There was only one small problem: nothing can actually be built here. During summer wet season most of the land is regularly flooded. That did not stop developers from selling more than 17000 plots. The trick was to show them to potential suckers during the dry winter season. Once enough money was collected the developers went bankrupt.

In 2006, many years and at least 25 million of our federal tax dollars later, the land has been repurchased by the state of Florida and is now carefully undeveloped. At some point the plants will take over the roads, the canals will disappear and the unobstructed sheet of water will flow once again towards Everglades, which if we are as lucky, as we have been stupid, may be enough to save the fragile Ten thousand Islands

As far as being lost incidents go this one turned out to be quite educational. We paid a price of a delayed dinner. Nature unfortunately is still paying much higher price. 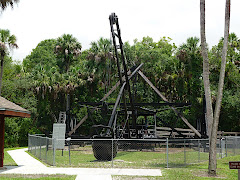 Some rivers don’t really look like rivers at all. This one was 60 miles wide, 100 miles long and most of the year only couple of inches deep. Moving slowly to allow grass grow in its wake, birds wade in its waters, alligators and turtles breed on its banks. But it was too big and too lazy and it was mistaken for a swamp. A road was built across. Considered a technical feat of early 20th century it was constructed just like any other road in Southern Florida: by dredging a canal and piling rocks on its side. It only took 10 years after the Tamiami trail was completed for people to realize that they didn’t just build the road. They erected a dam. Huge swaths of land were drained and cultivated, numerous canals were laid out diverting water. 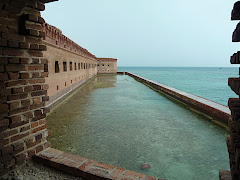 The option to visit Fort Jefferson is left to the passengers of M/V Spree and I try to lobby for it. According to Damian my public relation skills are on par with those of BP executives so I don’t expect much. But the dive master in charge of the trip planning describes it as groovy, plus the tropical wave threatens to collapse, so it’s decided we’ll skip one dive and do the fort. Hooray!!! Tropical wave is the south equivalent of an Arctic front: one of those meteorological terms that mean the weather can change for the worse. Spree docks with a thump as the squall starts. 15 minutes later the torrential rain is over leaving fresh cool air. We are the only people left on an islet, not counting few campers and resident park staff, as Spree can dock only after all the ferries from Key West leave.