We’ve learned a new verb: jeeping. Well, in our case it’s probably nissaning and we are obviously not doing it right. As far as I can tell it involves taking your unsuspecting car on a deadly, narrow, mountain road in search of breathtaking views and an adrenaline rush. Our truck is more than happy to oblige, but the driver and the pilot (otherwise known as I and Natalia) not so much. 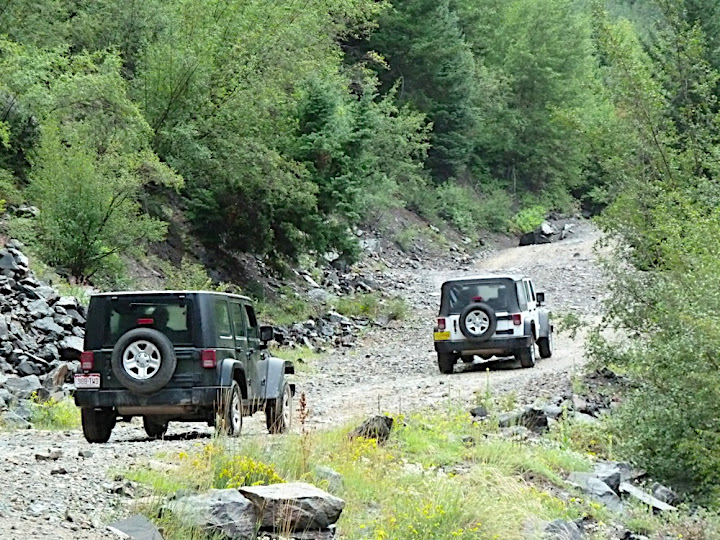 Jeeping on the Alpine Loop

One problem is you never know what awaits around the corner. We wonder if the road marked in a guide as moderate jeeping is easy enough for us? (It isn’t). Once you commit to a road there is usually no turning back. And I don’t mean it in a metaphorical sense. The road is literally too narrow to turn. I suppose one could just back off all the way down.

After climbing the first couple of switchbacks I start feeling pretty good about it and do my best to ignore panicky voice from the passenger seat compelling me to slow down. I’d rather drive as fast as I can and be done with it, but we are already crawling at an impressive 5 to 10 miles per hour. Slowing down further probably means stopping and kind of defies the purpose. It’s not like I can enjoy the stunning views since I am concentrating on not ending my and my significant other’s lives prematurely by taking the wrong turn and ending up in a mile deep canyon.

And I have a whole list of worries. For example: what happens if someone is similarly compelled to drive from the opposite direction. There is no way we can pass one another here. One option is to just switch cars, but that does not solve the problem of turning. To make things worse around the corner I see the sign proclaiming ‘one lane road’ and sure enough the road gets narrower. Do they really mean it was a two lane road up until now? 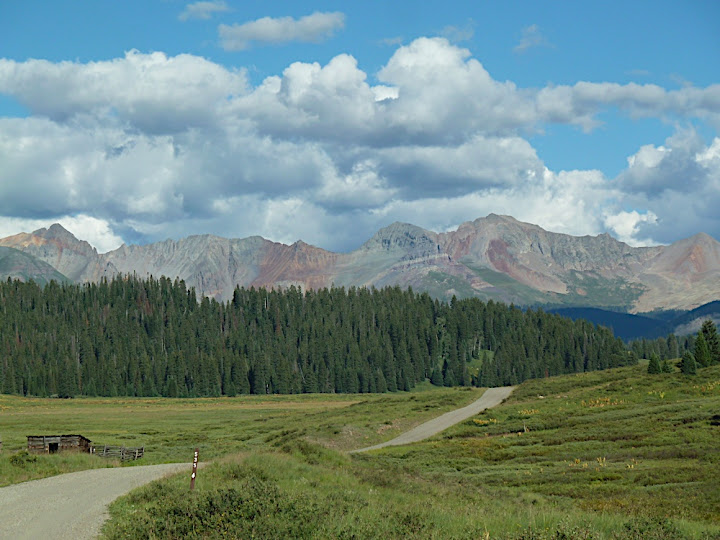 Also I fret about the things affectionately known as our earthly possessions that we’ve hauled all the way from Vermont. I can hear some noises from behind and I know it must be our bikes putting up the futile resistance against the suitcases filled probably with Natalia’s shoes. And last but not least I am not really sure how much is too much for our poor Frontier. We’ve had very few issues wit it so far: check engine light that came on after I did not close the tank properly fixed itself after a day or two. And switching back from 4x4 to standard drive requires putting the car into reverse and move at least couple of inches. The procedure not mentioned anywhere in the owner’s manual. We’ve decided to take it as a sign of individuality. For now truck is happily climbing the road which sometimes gets steep enough to virtually disappear below the car’s hood. Simple physics tells me that at some point this nice beast will refuse to go up, or worse will just topple to one side. I notice we actually try to prevent the heeling by moving our bodies in opposite direction. This works much better on a sailboat but ridiculously inadequate here. Constant shaking does little to improve our moods.

Finally what gets us is one turn, not only absurdly steep but also with a ditch running on the inner side of it. In the middle of it our left front wheel seems to be 6 feet (or 2 meters) above our right rear wheel. We do negotiate it somehow but once it’s behind us Natalia had her fill of adrenaline for the day. I am secretly relieved it’s no me who calls it quits first. We turn back although it’s not a 3-way turn. More like 45-way turn. Going down is no easier but at least I discover the magic button that makes the car to apply breaks and reduce gears automatically. All I have to do is to steer. 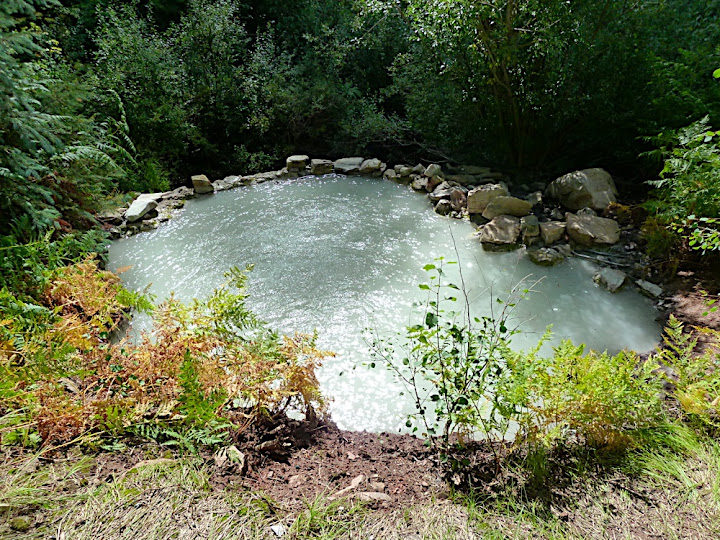 So if you want to try it, a couple of pointers. No winter maintenance sign is just that. You should not take it to suggest that there is any summer maintenance performed. It means that in winter you are going to be dead for sure, and in summer you have a slim chance of survival. I also highly recommend taking somebody else’s car before torturing your own. One less thing to sweat about if you have to abandon a vehicle. Finally, a fully loaded truck is not as nimble as a tarp covered jeep although both fall at the same speed according to Galileo.

Take this description with a grain of salt. We’ve tried two roads so far and one of them was a great fun. It was 15 miles of colorful alpine meadows and huge mountains all around. It took us to the trailhead for the only true geyser in Colorado. There was no-one else there and we could not resist skinny dipping in a milky sulphuric waters. The first and probably the last time I was talked into soaking in a geyser spring.

The road that we did give up on was the one through Imogene Pass from Telluride to Ourey. It climbs to 13,114 ft (3997 meters) and even wikipedia claims it’s not for a novice driver. And since I don’t know how one can get better at nearly killing oneself I fully intend to stay the novice driver forever. 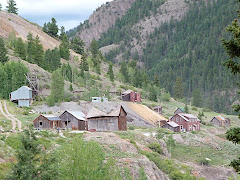 San Juan Mountains are treaded lightly once more. Where the Utes used to hunt game, tourists are chasing ghosts. And while in Europe ghosts inhabit castles and are result of unhappy aristocratic marriages, American ghosts are signs of a once new era reminding us of failed capitalist ventures. Remnants of towns and mines mark brief interlude of commercial exploitation of these beautiful but harsh mountains. 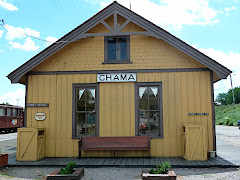 Bored? Looking for a new mode of transportation? Join thousands of Americans in this brand new discovery of railroad travel. No, I am not talking about switching from car to train for a daily commute. This is about train as entertainment. Everyday use of trains is in the same sorry state it has been since the demise of steam locomotive. We’ve encountered this type of diversion twice so far: in Chama, New Mexico and in Durango, Colorado. Commercial application was abandoned in the 60s due to the usual reasons of cheap gasoline and better roads. In 90s is became tourist attraction. Clearly there are enough people willing to don dark clothes (to avoid staining by airborne soot) and spend a few hours in a densely packed open-air gondola cars chatting with strangers, which is advertised as particularly enjoyable. Upgrade to an adult-only parlor class available - obviously the organizers thought about anti-social types like us who are not overly fond of children. The railroads are engineering wonders. And they traverse one of the most picturesque parts of US. But if you buy a ticket be prepared to spend couple of hours traveling to nowhere: Osier, Colorado or Silverton, Colorado. Both are ghost towns.