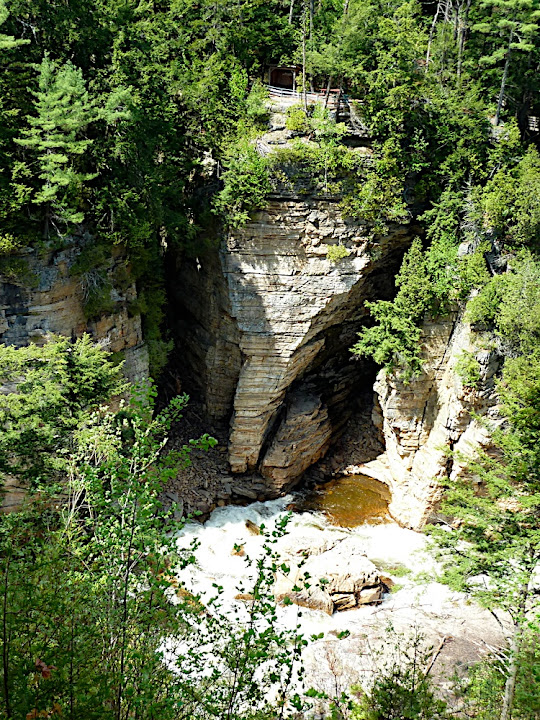 Falls are in abundance in Adirondacks, and Ausable Chasm is one of the largest and prettiest. Or it would be, if not for its economic exploitation. The chasm is fenced, but not to protect its ecology from people, or people from falling into it, but to prevent you from getting a closer look without paying an admission fee. It costs $5 for a peek and $16 to hike around. Despite the price you do have to hike yourself. Although in the season they’ll actually shuttle you back to the parking lot, so you don’t have to walk back and look at the nature for too long. In case you don’t find the chasm and the falls appealing enough, countess related activities are provided: tubing, rafting, lantern tours, historic tours - you get the idea.

We were visiting it in early May and there were probably no more then 10 people a day on the trails. The place was calm and magnificent. Judging from a ghastly website it must be hell in the summer. 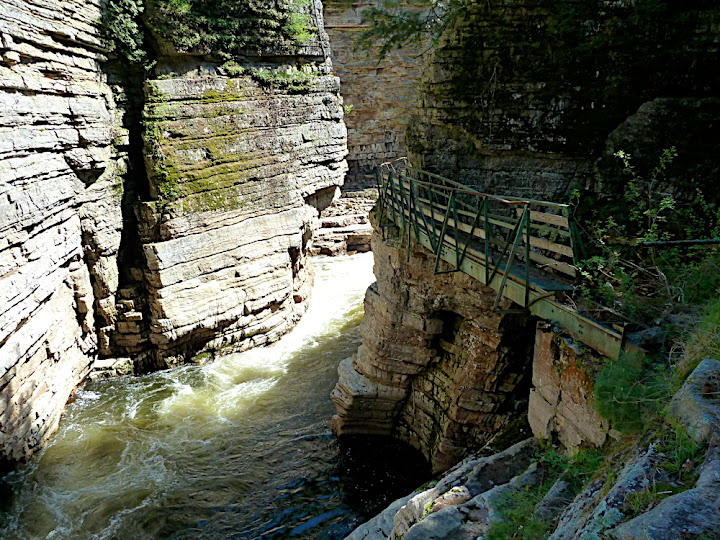 The place is marketed as a family amusement park type of adventure. Nothing wrong with that in principle but, if that’s your thing, you’re probably better off visiting a real amusement park.

Maybe we are not as bad as our ancestors who had 2 tonne boats floating down the gorge and then towed back up again and who erected artificial walls to keep the water level high. Nowadays only light rafts and tubes are used that can negotiate even low level of water. In the past platforms were constructed inside faults. Now only narrow bridges traverse them. On the other hand as the number of visitors grows, so does the damage. 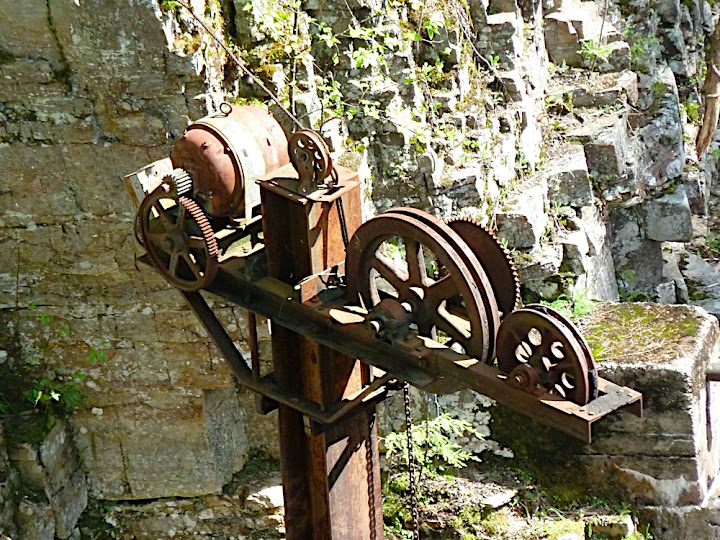 Like most people who managed to get a taste of planned economy, when given a choice between state and private ownership I usually stay firmly on the side of free enterprise. Government involvement sooner or later leads to shortages of pretty much anything (I mean: if you cannot plan for the amount of toilet paper that people would use, what exactly can you plan for?). And fighting free market with regulation is like fighting gravity. You push against it temporarily but sooner or later things find a new unexpected equilibrium or everything falls and shatters to small pieces. 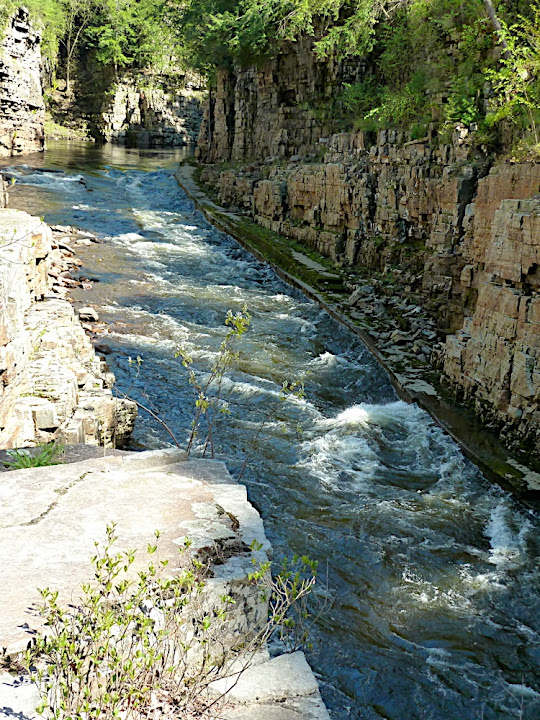 Wall at the navigable section

So it’s not easy for me to admit that I prefer the inefficient state to manage lakes, mountains, trails, canyons, forests and other nature attractions. I am not saying it should be free: I’ll happily pay higher taxes and admission fees if they go to maintenance and preservation.

Private companies are not well suited to preserve even when they profess good intentions. The ultimate goal of a private enterprise is to make money and because of that they are way too efficient at drawing crowds and enhancing your experience to do a good job of preservation. Yes - if they didn’t build all these walkways, and if they didn’t maintain the trails fewer people would be able to enjoy the views. Not necessarily a bad thing. 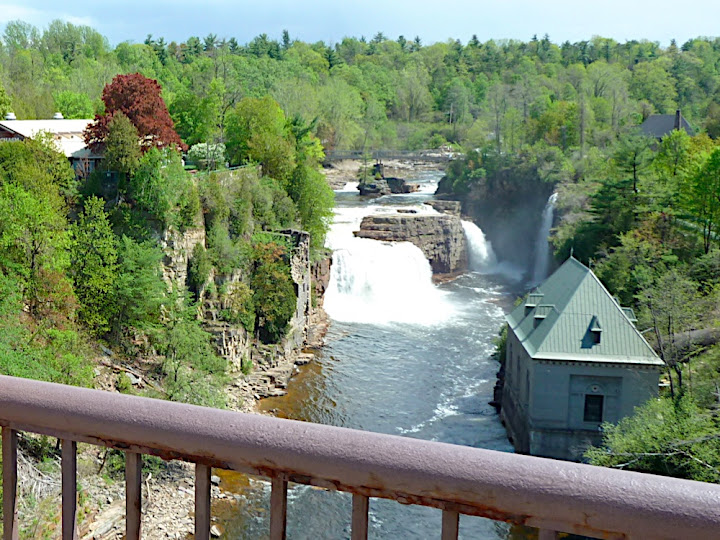 I am not suggesting that the Ausable Chasm Co. is doing something illegal: last time I checked lack of taste was not a crime. And quick Internet search does not reveal any skeletons apart from boaters’ complaints. According to federal and most state laws you cannot really keep people from using navigable water. In spite of that the company successfully lobbied for many years to keep kayaks from the chasm arguing that canyon walls are too high for effective rescue. Apparently paying the fee eliminates such safety concerns. 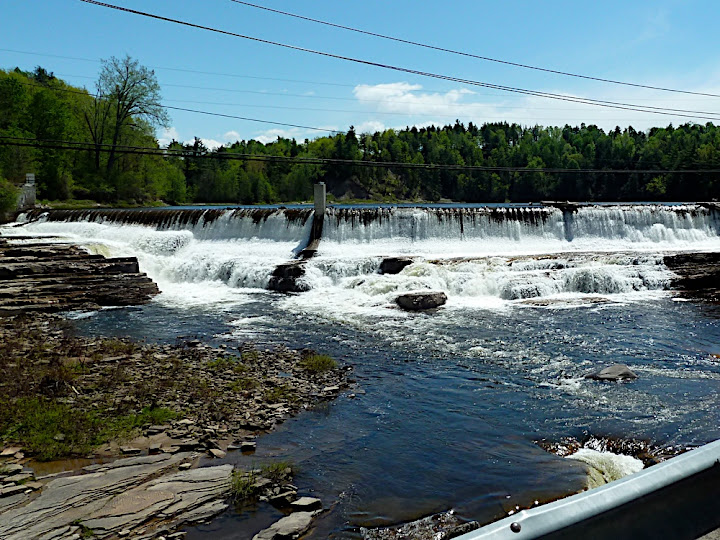 Interestingly enough there are also some traces of the state attempting to buy the land in early 20th century. Looks like good people of New York did not agree with me on the whole state should own this issue.

The chasm is beautiful. The packaging stinks. By all means, go and look. You can get pretty good views from the public roads and bridges (check the map, you can drive or walk quite close to the Rainbow Falls). And consider donating to your favorite eco-charity instead of buying a ticket. Find some other falls - there are really many to choose from, maybe not that accessible, not that extravagant but probably more rewarding. 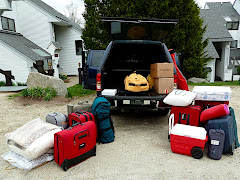 Reality is a tempting thing to ignore. All those inches, centimeters, cubic feet. Who wants to keep track of them. Who needs a painful bargaining with physical world. This is more or less what I was thinking when observing a pile of our of luggage assembled haphazardly in front of the suddenly and painfully shrinking truck. It was clear, well, to me it was clear, that we cannot take everything. No superpowers that I and my better half posses can squeeze everything into the car. But I know better than to argue. I don’t really do hardware in this arrangement conventionally known as marriage. Come to think of it I do not really do hardware in any arrangement. So I patiently handed over bags. Rearranged packages. Carried our bikes in and out.And finally it worked out much better than I suspected. We could take nearly everything that we wanted. With the exception of skis and some winter gear. But winter is far away and we figured out couple of ways we can retrieve our stuff. In the meantime I can get back to ignoring reality. Everyone should try it from time to time. 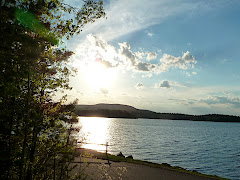 Hike to the top of the mountain to gaze at the calm water below, stop by the roaring falls cascading down the gorge, stroll by the quiet lake if you feel it’s too cold for kayaking: Adirondack State Park is great for outdoor activities. Including bizarre ones like catch-and-release fishing (hurting and stressing fish for dubious satisfaction of the angler), gem panning (rinsing a purchased bag of pebbles in a futile hope the seller forgot to remove valuable stones) or making campfire in the woods (too much worrying it may spread).