Furkot - a trip planner web application that we develop - displays attractions and points of interest that can be worked into one’s trip. So we are constantly on the lookout for websites collecting geotagged information about particular type of attraction, be it divesites or museums, that we can point Furkot to. 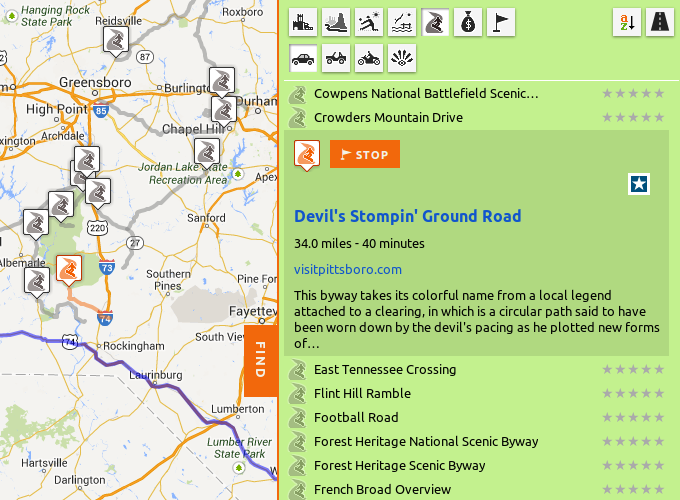 Add road trips to your roadtrips

Imagine my joy - and, as I explain below, imagination is all that you have to go on - when I found byways.org. It was a website for travelers that presented information about scenic roads in US, over 850 of them, complete with maps, photos, and sample trips. And we didn’t even have to run our crawler over it, since the raw content was made available as a set of XML files.

We got to work, parsed the files, extracted information, added it to Furkot’s maps and voilà: Furkot users could incorporate entire byways into their trips. Pleased with ourselves we announced this new exciting feature on Facebook and Twitter on September 28.

In less than a day we realized byways.org was no longer available. Neither was its sister website, bywaysonline.org, designed to help people designate and maintain byways. At first we thought it was a hiccup: hardware glitch or a configuration error. Then we hoped it’s government shutdown starting early. For a brief moment we even deluded ourselves that it was part of a plan to advance sites’ outmoded interface into the 21st century. But when byways.org started redirecting to fhwa.dot.gov pages we knew it was not a temporary interruption.

We contacted FHWA and the response from the employee in charge of byways program confirmed our suspicions:

With the most recent surface transportation bill, the National Scenic Byways Program was not funded. As such, we have had to downsize our web presence and migrate the information to our internal servers. We are still in the transition process, but the websites (byways.org and bywaysonline.org) are being redirected to the location of the information on our servers (www.fhwa.dot.gov).

At the first glance it didn’t seem too bad. Links were broken but may be we could just point our users to a new place. Unfortunately it turned out FHWA only shows information on 150 (out of 850) byways - the ones that are designated as either All-American Road or National Scenic Byway. For all others all that’s available is a single line: Sorry, information about this byway is no longer available. Sorry, indeed. To add insult to the injury, byways that are featured on FWHA website display a fraction of information that was available on byways.org: no sample trips, no related byways, no nearby attractions. And the nifty service that provided raw data is gone as well: no more XML files to parse, no more content to display to Furkot users.

FWHA: Come closer! We are no longer here...

To be sure, we are not advocating that government using our tax money should perpetuate all the programs it ever started. We probably do have better uses for FHWA people and resources than marketing of tourist attractions. What we would have liked to see though is some kind of public announcement and some sense of responsibility for the money already spent. A website was closed and shuttered without any warning. The data that taxpayers funded to collect are gone from the public space with no chance given to people willing to continue to maintain it. And there is no trace of any public debate: was byways.org truly that rarely visited that nobody but us noticed its disappearance? If that’s the case closing it to save the peanuts you need to operate the website may be the right thing to do. But hiding information that was once available is not.

While not done under the government shutdown banner the discontinuation of byways.org bears unfortunate resemblance to petty and mostly unnecessary closures of other government websites. In case you don’t regularly check NPS website, all its pages display nothing but: Because of the federal government shutdown, all national parks are closed and National Park Service webpages are not operating. I don’t know why FHWA closed byways.org without notice, but NPS explains its decision: Because it will not be maintained, the National Park Service website will be down for the duration of the shutdown, closing off access to 750,000 web pages about national parks and programs. Setting aside political motivation, I still take an issue with the sentiment that outdated information is worse than none at all. If that was the case shouldn’t we be destroying books and back issues of newspapers? 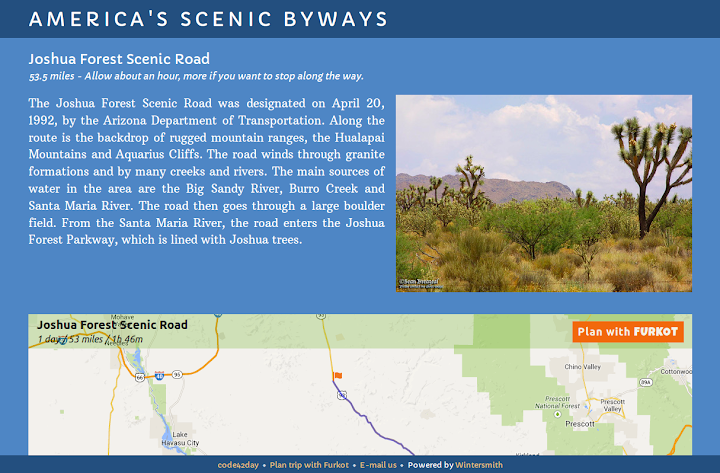 Back from the dead

Since byways.org was not closed as part of government shutdown it is unlikely to be reopened when the shutdown ends. We want Furkot users to benefit from the information that used to be available there. We looked at what we managed to download and spent the last week on a project designed to fill the void left by its disappearance. You can see what we’ve done so far at scenicbyways.info. Better yet, you can help, as we are developing it as an open source project on github.

We don’t have all the raw data byways.org once displayed. We’ve only got what we needed for Furkot intending to direct users to byways.org for more information as we do with all the attractions and points of interest. Hopefully once government shutdown ends we’ll be able to retrieve more and add it to scenicbyways.info.

We would like to ensure in the long term that when public domain data is no longer maintained by a government agency it ends up in the place where it can be found and reused. And yes, we will be contacting our congress members to do something about it. Feel free to do the same. 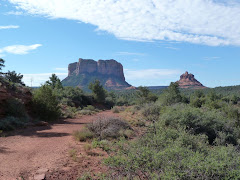 Aren’t your tires too skinny? asks a woman who is anything but. I am furiously pedaling uphill and sweat dripping down my forehead seriously impairs my ability to fire a smart retort. Everything that comes to mind is flagged as rude by my internal filters. She looks like she has never been on a bike that hasn’t collapsed under her but we are in Steamboat Springs and everyone is an expert. Our first encounter with mountain biking took place in Killington, Vermont. As hikers forced to jump out of the way of cyclists careening down a steep slope, we didn’t care for it at all. It took us ten years and a visit to Mammoth Lakes, California where we chanced upon an easy trail around Horseshoe Lake that we started to consider the challenges of dirt roads and single tracks. A trip to Sedona, Arizona cemented our new found enthusiasm: Red Rock Pathway is a veritable paradise for a budding mountain biker. 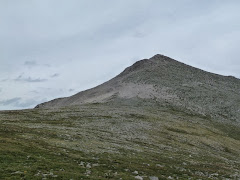